In 1973 Faliero’s son Alberto Masi took over the Vigorelli premises, and Masi senior relocated to Carlsbad in California where he opened a new manufacturing facility, anticipating the boom in cycling that was to see the US bicycle market expand hugely later that decade. The bikes from the SoCal facility are known as the Masi California bikes. Masi bicycles and Masi California bicycles were ridden to Olympic podium finishes in Melbourne (1956), Rome (1960), Munich (1972), Montreal (1976), Los Angeles (1984) and Seoul (1988). Faliero Masi was to return to Italy having sold the rights to market bicycles bearing his name to an American businessman. Ownership of the hallowed name having changed hands, the Masi family were unable to trade in the US under their own name. Instead, Alberto would export bikes to the US bearing the Milano 3V brand name.

In the 1980s Alberto Masi was an early proponent of oversized steel tubing, and patented a method of frame construction which featured unique Masi 3V internal lugs. The straight gauge thin wall chromium-molybdenum EXCELL tubing is silver brazed to the investment cast lug, and the resulting frame benefits from increased rigidity and thus reduced flex, all whilst saving weight. This proprietary method of construction means that the mitred tube ends are all visible, leaving no margin for error, in contrast with traditional external lugs which can hide a multitude of framebuilders’ sins!

Masi frames (other than very early models which used ‘Pela’ B.B castings) almost always feature a large capital letter M cut-out of the underside of the bottom bracket shell. The fork crown was almost invariably flat topped and would often include long tapered reinforcements on the inner face of the fork blades.

This particular listing is for a black metallic steel road racing frame, handmade by Alberto Masi in Milano, Italy. Famous internal lugs, oversize tubes and engraved ‘Masi’ seat stays. The bottom bracket has the iconic ‘M’ cut out. Highly detailed decals,sophisticated braze-on front derailleur. Paired with a Masi fork with a distinctive chromed crown with detailed and sophisticated engraving. The brake cable routing is traditionally externally routed for a timeless and classic look.

The frame has been professionally repainted and looks better than new! Perfect technical condition as well.

Headset is machined and only for picture purposes. 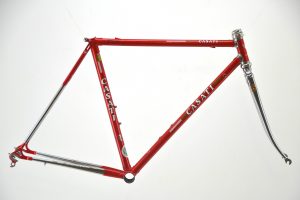 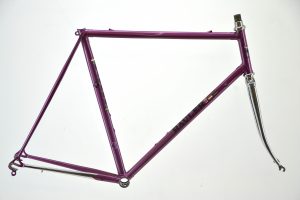 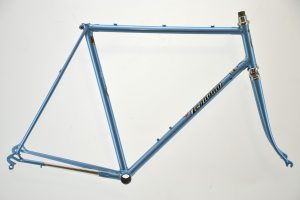 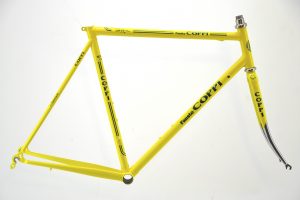 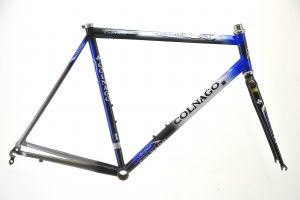 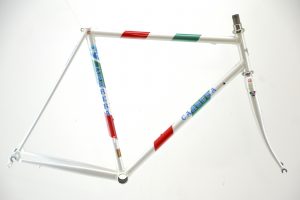 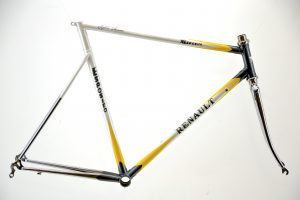 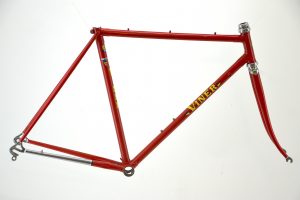 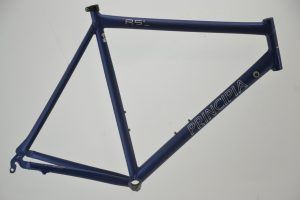 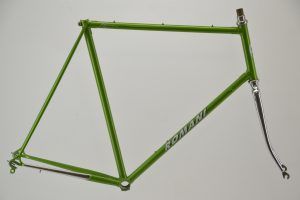