Sannino is an Italian brand built by Mauro Sannino. He was taught framebuilding by his grandfather and spent about 10 years apprenticing to other framebuilders before starting his own business in 1979. He earned his reputation by supplying bicycles to the Polish and Russian national teams. Production was fairly limited, with about 1500 frames per year in the mid-late 1980s.

Many of the early models were a bit unrefined but by the mid-1980s, things had improved considerably and his bicycles began to be ridden by professional teams around the world. A trademark of many Sannino models were steeper geometries as well as a deep racing red color which became his signature of sorts. Seventy-five degree seat tubes and seventy-seven degree head tubes were used on the mid-1980s Professional models.

This wonderful example of the Crono time trial bicycle is a team issue build using Oria ML 25 double butted tubing made specifically for Sannino with cloverleafed seattube and downtube. She’s sporting a full carbon disc rear with a 26″ (571) Roval front and full Campagnolo C-Record Century groupset including the ultra-rare Delta brakes in a gunmetal finish.

This bike with this build is as rare as they come and will be a shining gem in any enthusiasts collection. 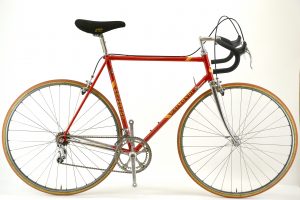